In Tune: Corbett vs. Dempsey Gallery 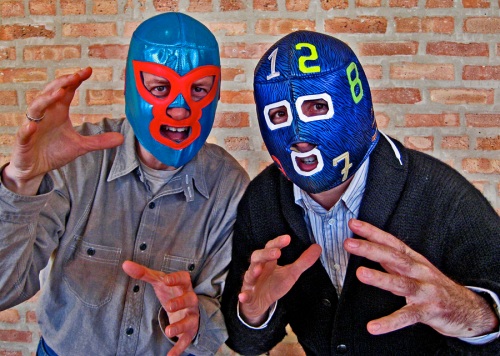 Open in the Wicker Park neighborhood for five years, Corbett vs. Dempsey is the brainchild of owners Jim Dempsey and John Corbett, both active in various curatorial endeavors in Chicago and elsewhere. The gallery, which is an outgrowth of their joint interest in the secret history of Chicago’s visual arts, has as its mission the exhibition of paintings, drawings, collages, assemblages, and sculpture by Midwestern artists of various styles from the 1930s to the 1970s. They represent various estates and living artists, as well as a select group of contemporary artists with roots in Chicago art. Given a longstanding involvement in music, the gallery presents sporadic solo performances and has presented artwork by musicians including Peter Brötzmann and Han Bennink. Their efforts at piecing together the history of art in the Windy City have thus far resulted in more than 30 published catalogs and an extensive show in 2007/8 at the Chicago History Museum titled, Big Picture: A New View of Painting in Chicago. Although the focus at Corbett vs. Dempsey is Chicago vicinity, they are not averse to programming exhibitions of artists from elsewhere, when it speaks to them, as evidenced by an upcoming show of new works on paper by the German artist Albert Oehlen. Dempsey’s other activities have included programming at the Gene Siskel Film Center, where he is House Manager. Among Corbett’s musical productions are the Unheard Music Series, an ongoing program of archival releases of unavailable creative music primarily from the’60s and ’70s, as well as a long list of live musical events including a decade-long stretch booking the Empty Bottle Jazz Series and Festival of Jazz and Improvised Music. In 2002, he was Artistic Director of JazzFest Berlin, and he contributes to Down Beat magazine each month.

We both stood round the computer and dreamed up the answers (to this interview) together. It would be impossible to extricate who said what. It’s a philosophical composite, it sort of represents the way we work at the gallery. We love it, we hope you can work with it. – J & J

You each had well developed and articulated roles for yourselves before you opened a gallery. Meaning, both of you had been working jobs for a long time seemingly suited to your interests in the fields of music & film, respectively. How did you guys initially decide to start an art gallery? Did the decision feel like a departure or simply an extension of what you were doing before? Did you feel like you were taking a chance creating a new space for yourselves personally as gallery owners?

We were both deeply involved in different kinds of curatorial activities before we set off on running a gallery.  In programming music films at the Gene Siskel Film Center, Jim was always interfacing with the local community, dealing with various collaborations; he liked to reach out to work with other institutions, like the Empty Bottle’s Adventures in Modern Music Festival, the Hideout’s live music programming, the World Music Festival with Michael Orlove. For Jim, it was important to pull together disparate parts of the curatorial community in Chicago, finding interesting continuity between music, film, and the visual arts. Likewise, John’s work as a music organizer brought together the local and international scenes in a context of mutual respect and collaboration, often featuring different media, like Peter Brötzmann’s exhibition The Inexplicable Fly-Swatter, which presented the German saxophonist’s artwork to an American audience for the first time. In our very first collaboration together, which took place at the Siskel in 2003, we not only presented films focused on Sun Ra in a month-long series called SUN RA SUNDAYS, but we featured live music and an exhibition of never-seen visual material. Since 1999, John has produced the Unheard Music Series, which issues obscure or out-of-print music from the archives.

In a certain respect, the work we set out to do with Corbett vs. Dempsey is a logical continuation of all these activities, not a radical break from them. For us, starting the gallery was a big risk because from the moment of conception to the first exhibition was a very short time, so we really hit the ground running. And there is a lot about having a gallery that isn’t simply common-sense…there are protocols and normal practices that you have to discover, so we had quite a steep learning-curve. It was a challenge that we devoured. An excellent example of how it continued activities in which we’d already been engaged is 2005’s EYE & EAR exhibition, featuring work by musicians who are artists and vice-versa. We produced a CD for that show and tied it into some programming at the Film Center. The other thing is that, each working independently, we had already built up audiences who were interested in what we were doing, so when we started the gallery some of those like-minded people came with us. That kept it from being like starting from absolute scratch…which was a plus.

When you step back and look at eras of certain genres of music made in Chicago (like jazz, r&b, soul, blues or gospel), it is possible to note attributes that, even with its diversity, make a case for a regional sound. Are there characteristics to the Chicago visual art scene that you can only appreciate over the span of time? Does Chicago art have a “regional sound?”

It’s a very tricky business trying to articulate what makes a specific regional art form distinct from another, but there are definitely some things that are unique to Chicago, both in music and in the visual arts. We have long noted the working-class base here, which seems pretty unforgiving towards pretentiousness, snark and irony. By the same token, both in sound and image, there’s a very strong interest in vernacular sources and in humor. Chicago is a town that makes terrible requirements of its artists; many, both musicians and visual artists, have to spend their lives with day-jobs to support themselves. But this also is reflected in the work, which never gets too big for its britches. And it (Chicago) creates an atmosphere of experimentation in which the fiscal stakes are never so high that an artist can’t feel free to break his or her own rules.

With the inclusion of musical performances at the gallery, the location above a great record store and Sun Ra related projects how does your joint interest in the music world(and/or film world)play into your curatorial process?

We love both music and art.  The decision to bring some musical events into the gallery space was specifically designed to attempt to introduce some of the music fans we know to the broader visual art world. And vice-versa, to bring art fans into a space where they can become intrigued by some sort of new music. We’ve noticed the mutual exclusivity of these worlds, which is sometimes disappointing, and we always try to break down those barriers. Live music is also just a way of making a gallery seem a little less intimidating and fussy, which is something we always strive to do.

Is there an art to creating monetary and hierarchical parameters around possibly previously unseen art?

To be clear, not all the artists we work with are, by any means, unknown.  But any time a curator attempts to assert that an obscure or relatively unknown artist is worthwhile, there’s a whole value structure at stake. One one hand, there’s a science to how things are valued, both monetarily and in terms of their historical value, but there’s also a more mysterious side to it. We try to be sensitive to both of those. It’s great fun and it’s lots of work, just attempting to decode the worth of things. For us, it starts with the basic notion that received wisdom is often incomplete. You need to question whether something has intrinsic interest, regardless of whether you’ve been told that it does or not. Answer that for yourself and then look at the bigger picture.

Why do you think it is important to focus on Chicago artists?

Through Chicago, one can easily observe how power and influence have shaped the history of American culture, obscuring or promoting certain music and art. Look at jazz musicians like Fred Anderson and Von Freeman. They’re our great beacons, the ones who stayed in Chicago and continued to make their own kind of music on their own terms. We adore that quality of independence, and we see it writ large in the visual arts as well.